Available for puchase at the retail shop at Mt. Peter in Warwick, NY and for order online

A Shadow of Love

1 Peter 2:19 “For this is a gracious thing, when, mindful of God, one endures grief while suffering unjustly.”

Lillian watched at the edge of the tree line as Christian hanged himself.

Sickened by his weakness, she regarded him bawling over what she presumed to be a poem or a letter to her, sitting on the dirty wood of the barn floor, silhouetted only by the Betty Lamp that burned by his feet. 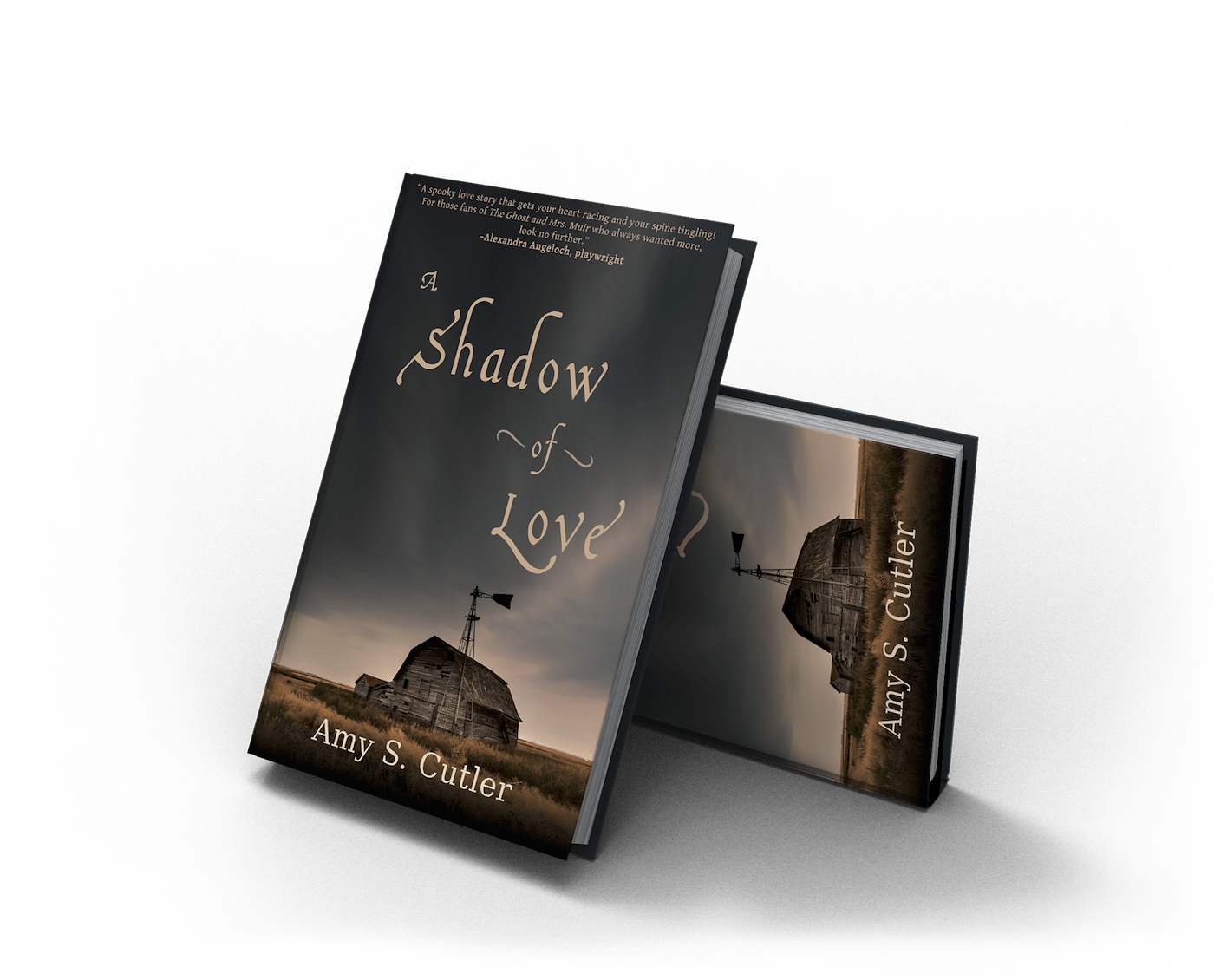 Feeling nothing but anger for him, she stood by as he climbed a wooden ladder up to the rafter and stepped onto the beam. It was too dark for her to watch him tie the rope. She didn’t see the circles around his eyes as he lowered his head and said a quiet prayer for his soul. Squinting in the darkness, Lillian only saw Christian tumble from the beam, caught inches before his feet hit the floor by the noose around his neck. She heard his neck snap, thinking for a second that it was the crunch of someone stepping on a fallen stick beside her. Slowly, Lillian crept from the cover of the woods. It was dark, and as she looked up at the moon, the clouds that blocked its light seemed to hear her and parted. By the light of the moon, Lillian stepped into the open barn and stood before Christian’s hanging body.

Her eyes darkened as she looked at him, swaying ever so gently, body involuntarily twitching as the life drained from it. Crouching down, Lillian picked up the paper that Christian had been writing on.

“You bastard,” Lillian whispered. She crumbled the note and tossed it into the darkness of the barn. “You kill yourself over me, a simple woman,” she told his hanging corpse. “And now I will live with that burden. I will live with people looking at me either with pity or with hatred. I will live while you float off to meet your maker?” The moonlight seemed to follow her movements. Lillian moved closer to Christian’s body, and the light from the moon shone on his hands, which were bleeding from the roughness of the rope.

Angry, Lillian cocked her head at the sight of the blood and closed her eyes, as if listening to directions from the wind. She nodded once, deciding.

Whirling around, she stomped out of the barn and searched for a stick. Finding what she needed, she trudged quickly back into the barn, her long skirt billowing around her ankles, dirty around the hem. She worked quickly, using her double-edged athame to slice at the wounds on Christian’s hands, producing more blood. Blood immediately stuck to the blade. She dipped the point of her stick into the blood and drew a circle, the red blood mixing with the dirt on the floor. Inside that circle, she drew a pentacle and stepped into the circle of power.

A white ball of light rose from Christian’s body, beaming out through the cracks in the barn’s siding. For a few seconds, that light swirled around him. Lillian opened her eyes and smiled. The light rushed through him, entering through the top of his head and exiting through his feet. As the light left his feet, it seeped through the wooden floor of the barn and into the earth underneath. The lamp snuffed out as the light left the barn.

“It is done.” Lillian sealed the spell with those final words. Working by only the glow of the moon, she stepped out of the circle. Lillian tucked her long hair behind her ears and brushed away the drawing. Leaving Christian’s note crumbled on the floor, she looked once more at his body and walked quietly out of the barn.

Lillian was free to live out the rest of her life. For Christian, however, the spell would not be broken. It doomed him to spend the next one hundred years as a spirit trapped on Earth, unable to move on and unable to love.

“I am done looking for love where it doesn’t exist. I am done coughing up dust in attempts to drink from dry wells.”

Hers was the softest voice I had ever heard. It sounded like a wind chime in the distance, beautiful but barely there, a whisper, yet perfectly clear.

“Annabelle, you need to wake up,” was all she said to me. So soft, but strong enough to pull me from my dream and back into the world.

My eyes opened to the fading light around me. “Mom?” I said and sat up, feeling the kitchen floor under me. “Mom?” There was no answer. Of course not, there could be no answer. My mother had died years ago, and now Christian was gone, too, and at that moment I was completely alone for the first time since I walked through these doors.

This house has a certain hold on me. I don’t know if it’s the house, or the energy, or the spirits, but from the moment I saw the listing, I knew I wanted to live here. The listing had read “Naples, NY – Beautiful, renovated 1860 farmhouse with all the modern conveniences. Sits on 150 acres complete with apple orchard. Relax in the airy kitchen and watch the deer play on your lawn. Throughout this 1,800 square foot, four-bedroom home you’ll find original millwork and lots of mystery.”

I knew I didn’t really need such a large home, or so much land, but when I clicked on the listing and saw the photos, I felt like this was my home and it was waiting for me. With a fresh coat of white paint, the house seemed dressed up on the outside, yet kind of worn on the inside. Perhaps I was just desperate for a place where I belonged, for a home of my own that had no ties to the life I was running from, but I felt a deep connection. Maybe I thought I would feel safe, because who would ever look for me in the middle of nowhere, in an old farmhouse that looks like a family lives there and not a recently single woman, all alone? Maybe it was just because it’s an enormous change from living in a city, and I thought that an unfamiliar environment would help boost my creativity, which had seemed stagnant for so long. Whatever the draw was, I certainly never expected the journey that I have had since walking through these doors.

When I awoke on the kitchen floor after hearing the sweet voice of my mother in the distance, I was not sure if I really wanted to be alive. My heart felt broken, a piece of it taken away, and I felt that to get it back, I had to leave my life behind. Only a few weeks have passed, and it seems like the fog is clearing and my memories are getting fuzzy. I want to grasp hold of them, but it’s like trying to catch air; the moments just slip away. Certain things I will never forget. Christian’s lips, when they finally met mine, the way his hand felt pressed into my lower back while we danced in the kitchen. The curve of his spine, as we laid in bed together, wondering at the miracle of us being able to be together at all, fingers touching, maybe not completely solid but close enough. His eyes, as clear and blue as a frozen lake, that seem to hold so much life, even though they were void of life completely.

I must sound like a crazy person. I probably am. I fell in love with a ghost, a ghost who tried to chase me away but ended up holding me in his arms. A ghost by the name of Christian who is now not a ghost anymore, but something beyond my reach.

The more time that passes between then and now, between the unreal and the real, the more I wonder where I go from here. The snowy season is ending, and as spring approaches, I feel like I’m reliving everything that has happened. I must go back to the beginning to sort this all out, to make sense out of this great love I have for a man who thought that love was the worst-case scenario. A man who wanted me out as I was coming in.

"A Shadow of Love" is not only full of bumps in the night (though make no mistake: there's plenty of that!) Equal parts spooks and heart, this novel is a dark yet hopeful story of rebuilding, of recovery, and of letting go. Amy's tale is a celebration of personal regrowth, pushing you to embrace your full self even in the face of abuse and regret. This is a paranormal romance that's at once harrowing and sweet, haunting and heartfelt. It's filled with a realistic small-town cast of characters, each full of personality. You can't help but root for them right to the thrilling end.

Sampson-Cutler's prose is so confident and intense that it grabs you from the very first line and doesn't let go. Her unique voice switches gears between gentle melancholy and total creepiness so effortlessly that I felt like I was reading a true master of the genre. Even the first few pages are so topsy-turvy that I was hooked right away! Simply put, I love Sampson-Cutler's writing. I can't wait to read more from her.

A spooky love story that gets your heart racing and your spine tingling! For those fans of the Ghost and Mrs Muir who always wanted more, look no further.

A.S. Cutler seamlessly weaves the macabre with the modern, the occult with the psychology, and the supernatural with the everyday. As Annabelle separates from her old life and into her new, we're led to ponder the interplay between the tangible and intangible, the conscious and subconscious, and the very nature of our own reality.

AUTHOR, My Mother’s Daughter and the New Rules of Time Travel series

I loved this clever idea for a love story. Absolutely loved the story and book.

I really enjoyed it. I thought the book was an easy read. Very easy to get engaged in and want to find out the ending.

Great first effort from this author! It was a page turner for sure. It was easy, simple reading with a great flow to the excellent and innovative storyline, I always wanted to find out what happened next! It is a love story, it has darkness, it has intrigue, it has twists and turns! I can't wait to read her next book.

The book was awesome. I think it is a home run, and I love the ending! Just an awesome book all around.